This week I’ve been to see some footage from the new Paddington film which will be out at the end of November. It’s got a brilliant cast including Hugh Bonneville (who introduced the footage), Sally Hawkins, Julie Walters, Peter Capaldi and Nicole Kidman and it tells the story of how the Brown family meet and adopt Paddington. The clips I saw included Paddington managing to squirt an unsuspecting passer-by with ketchup, the introduction of Kidman’s character – who’s head of taxidermy at a museum – and a fantastic sequence involving Paddington on a skateboard, hitching a lift from a London bus and then flying over London’s rooftops. It looks like a film the whole family will be able to enjoy – it’s in cinemas on November 28.

Former X Factor star Stacey Solomon is turning author with the release of her first novel. Solomon’s book will be called Walk on By and follows singer Charlotte Taylor who is plucked from obscurity and placed in the path of businessman Blake Hudson. It’s the first release in a three book deal and will be out on February 5.

Aretha Franklin is releasing an album of covers later this month. Aretha Franklin Sings the Great Diva Classics will include her takes on Adele’s Rolling in the Deep, I’m Every Woman by Chaka Khan and even Sinead O’Connor’s Nothing Compares 2 U. The album will be out in the US on October 21.

Catherine Zeta Jones is to play a real-life drug kingpin in thriller, The Godmother. She’ll star as Griselda Blanco, the first and only woman to rise to the higher echelons of Colombia’s Medellin drug cartel. Filming’s expected to begin next year.

The music video to Michael Jackson’s Thriller could be returning to cinemas – this time in 3D. Director John Landis says he wants to bring the clip back in “a highly polished and three dimensional way which would be very exciting on the big screen”. If it happens we should see the finished product next year.

Quvenzhane Wallis, who we’ll see in the new version of Annie this Christmas, has signed on to star in a film adaptation of novel Counting By 7s. The story follows Willow Chance, a bright young girl who, after the death of her adoptive parents, is taken in by an unlikely surrogate family. After all that’s happened to her, Willow manages to build a community that she heals and that heals her.

I’ve written about Viola Davis’ new TV series in previous columns. It’s called How To Get Away With Murder and it’s just debuted in the US. Well UK fans will be able to watch it on Universal Channel from October 22. It’s one of the most talked about new shows this autumn so it’s great we’ll be able to see it so soon after the US.

The Railway Children is returning to the London stage this Christmas. It’s being staged at the King’s Cross Theatre, where a 1,000-seat theatre, complete with a railway track and platforms, will be specially created. The production will even include a 60-tonne steam locomotive and Gentleman’s Carriage. The show previews from December 16 and runs until March 1.

Alex Hollywood, wife of baker Paul, is to publish her own cookbook. My Busy Kitchen will include recipes that are “easy, inexpensive and just a little bit different”. It’ll be available to buy from next February.

New trailers this week for the whole family! First, a new trailer for The Imitation Game starting Benedict Cumberbatch and Keira Knightley:

Jude Law stars in Black Sea about a rogue submarine captain who pulls together a misfit crew to go after a sunken treasure rumoured to be lost in the depths of the Black Sea:

And finally the trailer for the new film from Pixar, the people behind Toy Story. The film follows a young girl called Riley who is guided by her emotions: Joy, Fear, Anger, Disgust and Sadness:

WIN A SET DINNER FOR 2 AT THE MANGO TREE 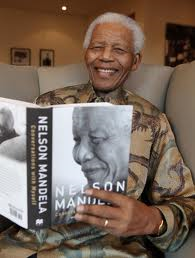 Nelson Mandela: Conversations With Myself