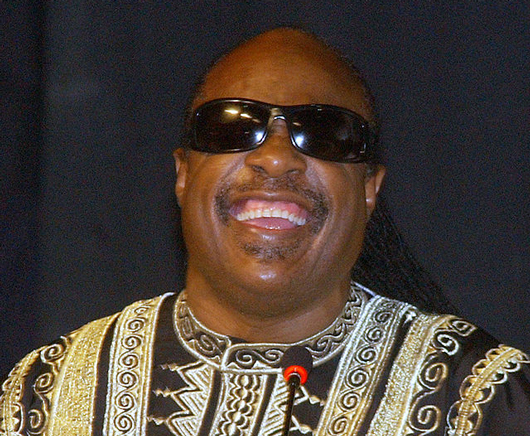 Stevie Wonder to be Honoured and a new Jungle Book film

Stevie Wonder, Billy Joel, Garth Brooks and Stephen Sondheim are to receive special honours later this year. They’re being feted by the American Society of Composers, Authors and Publishers at an event in New York in November. The gala is expected to feature other artists performing tributes to the honourees.

Is Henry To Play Pryor?

Lots of rumours suggest Lenny Henry is to star in a new theatre show about Richard Pryor. It’s thought the play will be a one man show and will be staged at the National Theatre, although nothing’s been confirmed yet but Henry has revealed he’s working with director Michael Buffing on the project. Henry has appeared as Richard Pryor before; he impersonated him in his 1989 standup show Live and Unleashed.

Stand Up To Cancer

Jennifer Aniston, Jon Hamm, Gwyneth Paltrow, Halle Berry and Jennifer Hudson are among the stars who’ll be taking part in the Stand Up To Cancer fundraiser in the US next month. The live broadcast takes place at the Shrine Auditorium in Los Angeles on September 5. Other celebs taking part include Will Ferrell, Ben Stiller, Rob Lowe, Reese Witherspoon, Pierce Brosnan, Kiefer Sutherland, Eric Stonestreet and Jesse Tyler Ferguson. A UK version follows in October, find out more at http://su2c.channel4.com

Michelle ‘Fights To The Top’

Ultimo creator Michelle Mone is writing her autobiography. My Fight to The Top is due out in March and offers an insight into one of the most successful British brands, told through a genuinely inspirational and honest personal story. Mone says she hopes the book “will cover everything from the early days of my life, all the stories I’ve never spoken about, through to inspirational business tips.”

Details of how to get tickets for this years Strictly Come Dancing have been announced. The live shows begin on September 26 with the final on December 20. The show will also be travelling to Blackpool on November 15. You can apply for tickets through the BBCs ticket website: www.BBC.co.uk/tickets

The Pride at Apple

Sherlock star Andrew Scott will be at the Apple store on Regent Street on August 28 to promote his new film, Pride. He’ll be joined at the event by co-star Faye Marsay. The film’s premiere follows on September 2nd at the Odeon Camden.

Benedict Cumberbatch, Christian Bale, Cate Blanchett, Naomie Harris, Tom Hollander, Eddie Marsan and Peter Mullan have joined the voice cast of Jungle Book: Origins. Cumberbatch is voicing the film’s villain, Shere Khan, whilst Andy Serkis will play Baloo the bear, and Bale will voice panther Bagheera. Blanchett will play Kaa, a sinister python who is also a friend to Mowgli, while Hollander will play Tabaqui, the jackal who is an underling of Shere Khan. Mullan will be Akela, the leader of the wolf pack that raises Mowgli. Harris is the female wolf Nisha, while Marsan is her mate, Vihaan. Serkis is also directing the film.

Ashley Jensen has been cast in the lead role in a new drama for Sky that sounds a bit more like a comedy. She’ll star in Agatha Raisin and the Quiche of Death, a 120 minute drama that will be shown at Christmas on Sky1, with Jensen playing PR turned detective Raisin. “It’s not often a part like this comes along for a woman” says Jensen. “Agatha Raisin is a strong forthright, independent, driven, successful woman, who is both funny and flawed, a real woman of our time.”

Winona Ryder is to star in a new mini-series from David Simon, creator of The Wire. She’ll appear alongside Alfred Molina, Jon Bernthal, Oscar Isaac and Catherine Keener in Show Me a Hero. The drama is set in an American city overseen by young, idealistic mayor Nick Wasickso. He’s given a federal court order to build low-income housing in a rich part of town which leads to civil disorder and may mean the end of his political career.

David Yates is expected to return to the world of Harry Potter and is in talks to direct Fantastic Beasts And Where To Find Them. Yates directed the last four Potter films and had a close relationship with both producers Warner Bros and writer JK Rowling, who is currently busy on the film’s script. The story is set 70 years before Potter and follows author Newt Scamander, who is commissioned to write a reference guide to the magical beasts found in the Potterverse. The film’s due for release in November 2016.

Eva Longoria is joining the cast of comedy series, Brooklyn Nine-Nine. She’ll appear in three episodes of the show’s second series as a lawyer who catches the eye of lead character Jake (Andy Samberg). The show broadcasts in the UK on e4.

This week we have The Woman in Black: Angel of Death starring Jeremy Irvine and Helen McCrory:

If that’s not your thing, how about Men, Women and Children, the new film from Jason Reitman – director of Juno and Up In The Air. It stars Ansel Elgort, Adam Sandler, Emma Thompson and Jennifer Garner:

Last Week Jenny reported on The Emmy’s…. did you watch it? We would love to know what you thought.  Or did you see Beyonce’s 16 minute MTV VMA’s performance? Isn’t Blue Ivy adorable.

Let us know what you think about the Celebrities and for more showbiz gossip follow @JennyPriestley on Twitter.

Showbiz update (with a sporting twist)