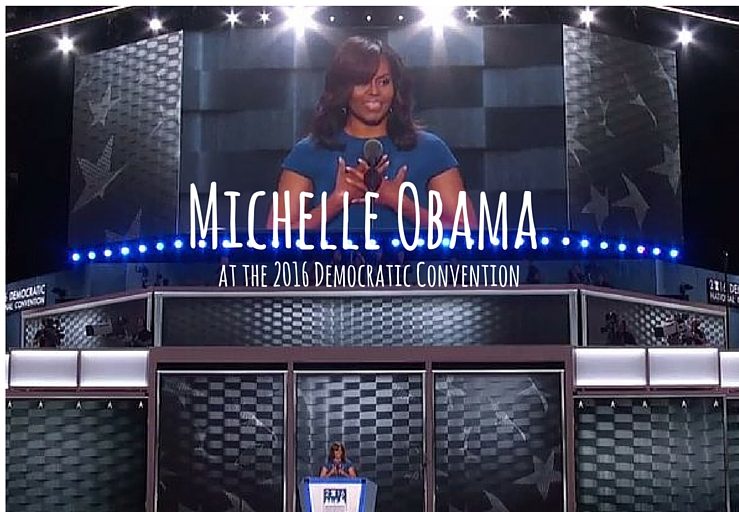 st times convention speeches aren’t remembered, filled mainly with rhetoric and posturing and political pandering. American political speeches are almost certainly not as noticed by us here in the UK.

But… at the DNC convention in Philadelphia, Michelle Obama delivered a speech that will be quoted and analyzed for years to come. It was filled with hope, determination, inspiration, and class.

It was Michelle Obama at her best.

She brought the crowd to it’s feet in her own way. Not shouting at the crowd, not slamming Republicans, NOT turning negative.

Our motto is, when they go low, we go high.

I loved every word.

With every word we utter, with every action we take, we know our kids are watching us. We as parents are the most important role model.

The story that has brought me to this stage tonight. The story of generations of people who felt the lash of bondage, the shame of servitude, the sting of segregation, but who kept on striving and hoping and doing what needed to be done so that today, I wake up every morning in a house that was built by slaves.

And I watch my daughters, two beautiful, intelligent, black young women, playing with their dogs on the White House lawn.

And as my daughters set out on the world, I want a leader who is worthy of that truth, a leader worthy of my girls’ promise and all of our kids’ promise. A leader who will be guided every day by the love and hope and impossibly big dreams that we all have for our children.

And because of Hillary Clinton, my daughters and all of our sons and daughters now take for granted that a woman can be president of the United States.

Michelle Obama is an inspiration to me: highly educated, witty and wise, warm and gracious, and passionate about her beliefs. She works tirelessly for her chosen causes, inspiring young women and reading stories to kids along the way. I would love to hear what you thought about her speech – Are you going to miss her as much as I am when she leaves the White House? Tell me all about it in the comments or on Twitter @AngieGreaves

Lupita Nyong’o: The essence of beauty