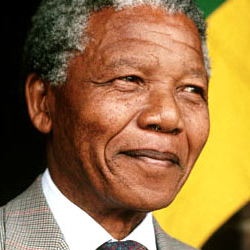 The spirit of Mandela

One of the brightest lights in the world went out on the evening of 5th December 2013.

Nelson Rolihlahla Mandela (born 18th July 1918) was, in my humble opinion, a global example of forgiveness. How many of us have felt hard done by when someone in our place of work deliberately attempts to out our light? How many of us are holding on to hatred for someone who did something years ago? We can remember the time, the place, the words verbatim. It’s not good for the health and what a waste of time.

Here is a man who attempted to fight racism, poverty, and inequality. Here is a man who stood for truth and  justice, for equal rights between black and white people in South Africa. The price he paid for being “brave” enough to stand was 27 years in prison on Robben Island in a damp concrete cell 8ft by 7ft  where he slept on a straw mat.

Now think about that person at work who’s bothering you!

Nelson Mandela had every right to be an extremely angry man. There was a lot of time he could have spent thinking about the wrongs that he had undergone in that cell, and could have even developed racist views. Instead of that, upon being released from prison, he chose to smile and dance and forgive.

Forgiveness is not just a word, it’s an action.

You can now rest in peace, beautiful Nelson.

Preparing Your Child’s Bedroom for Autumn