Talk about hype. What with all the political speeches, the barring of a nominee from Syria, a nominee kicked out for breaking the rules, all the gorgeous dresses, and most importantly the really important films nominated this year… the Oscars certainly didn’t disappoint.

But the moment I stayed awake VERY LATE for… the moment I waited for with my fingers crossed… held my breath for… was the moment Viola Davis won. And let me tell you, her speech? Oh her speech! It was moving and joyous and profound and wonderful. Real tears from this people. REAL. TEARS.

For me, this win for Viola Davis was the most gratifying. This was her third Academy Award nomination, the first for “Doubt” and the second for “The Help”. Because she’s been passed over in the past, she didn’t count on this win being a sure thing, even though many critics thought her outstanding performance was a certain Oscar winner.

Davis took home the Golden Globe this year and in 2010 won a Tony Award. Viola Davis is the first black actress to gain such acclaim for her acting prowess, the much prized Acting Triple Crown. She’s only a Grammy away from an EGOT so someone please land her a singing role already!  (Not discounting EGOT Whoopi Goldberg – but you did with a Tony for producing not acting.)

“People ask me all the time, what kind of stories do you want to tell, Viola? And I say, exhume those bodies, exhume those stories, the stories of the people who dreamed.” 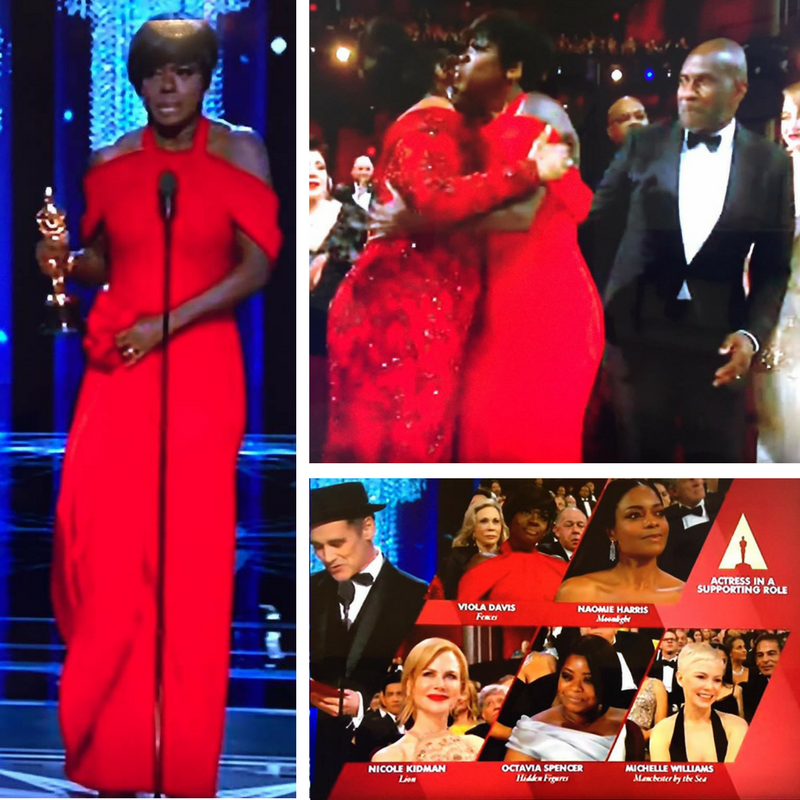 After her amazing speech, the internet went wild. As well it should.

Hallelujerrrrrrr! @violadavis ! ” We are the only profession that celebrates what it means to live a life!”

2nd living room standing ovation of the night. Yes @ViolaDavis! Yes sister! & now the speech of life, always! This is YOUR moment! #Oscars

“We are the only profession that celebrates what it means to live a life,” she said in her speech, right before praising director Denzel Washington and the late American playwright August Wilson, who published Fences in 1985. “Here’s to August Wilson, who exhumed and exalted the ordinary people.”

What did you think of the Oscars last night? Would love to hear your thoughts! Catch me on  Facebook and Twitter – let’s talk about it!