When asked by Angie if I would do a tribute to Leon Ware it was an obvious yes, without any hesitation. Of course I would want to honour this man who was a big part of my life and I loved as family. As I sit here looking at a blank page I am now scared I will not do him justice and am not quite sure where to start.

Growing up, music was a huge part of my life and “I Want You”, “I Wanna Be Where You Are”, “If I Ever Lose This Heaven”, “Inside Your Love” and one of my all time favourite songs, “Looking Up to You” to name a few were part of the soundtrack to my youth. So imagine almost 10 yrs ago I get a call from my business partner at the time, who was in LA, asking me for advice as she had just met this guy called Leon Ware and she wanted to know if I knew him and if I think he’s someone we should work with! Don’t think I said yes quick enough! This demonstrates that Leon was one of the unsung greats, you may not know his name, but you definitely knew his music, even Quincy Jones was in awe of him! His contribution to music is just immense, but many tributes you read will list some of the great songs he was behind, some listed above so I will leave that element to the other tributes and Google. I want to tell you about the man.

Within a few months after the above phone call I was acting as his European agent and working on a European tour, the first of 5 European trips we did together. Both he and his wife showed tremendous faith in me, a rookie starting out in the music industry, to the point that when I started my own company 7 yrs ago they decided to come with me and be on my roster so on day two of RM2 Music being in existence, Leon was on the roster – this gave me such a boost of confidence, considering all the greats he worked with and now he chose to work with me.

There is a saying, “Never meet your idols”…….well of the any negative connotations of this saying, Leon was the complete opposite. Coming into contact with Leon and his wife Carol was being welcomed into a circle of love and warmth, we immediately connected. They showed kindness and had time for everyone they came into contact with. Leon was love, he loved his family, friends and fans all in abundance and had a zest for life I hadn’t seen in anyone else. His smile and laugh would light up a room.

I spent many hours listening to his stories, of which he had many, and we had many adventures on the road. I’ve always said I should write a book of my experiences, Leon needs a book of his own! He may have been 70 plus but he definitely kept me on my toes, you never knew what was going to happen next.  I said today even though I’m saddened by his death all my memories of him make me laugh and smile.

After his family his biggest love was to perform, that is all he wanted to do. He’d often try and get me to book shows that were not be financially viable but he just wanted to get out there. I always had to ask if Carol knew about it, as more often than not, because it wasn’t viable, Carol would say no which was the business thing to do. But Leon just wanted to perform. If you never saw him live you missed class, smooth, sensual, effortless magic. He made it look so easy. One of my favourite memories was while we were rehearsing with the Baltic Soul Orchestra and they had a string section.  At the end he wanted to run through “I Want You” again and it was just him and the strings. It stopped me in my tracks, it was absolutely sublime, so  beautiful. I was spellbound and so in the moment that even though my phone was in my hand I couldn’t even press record.

Our last conversations about shows were about developing a one man and his piano intimate show which would have been heavenly, (I guess that’s where it will happen now). It was his health which prevented this from coming to fruition. We had worked with a few bands and musicians over the years and everyone of them had the utmost respect for him and were in total awe and wanted to give him their everything.

Well, you cannot speak about Leon without speaking about sensuality/sex, another subject close to his heart as demonstrated in his lyrics and album artwork. It was no coincidence he was born just after Valentine’s Day! To him this was another way to express love, and once it was encapsulated in love there should be nothing taboo about it.   I remember giggling to myself when Ronnie Scott’s became a bit worried about what some of their members might think after the first of 4 shows there, as they didn’t expect some of his conversation to be as risqué as it was. By that point I was oblivious to it and didn’t think it would catch some people off guard. 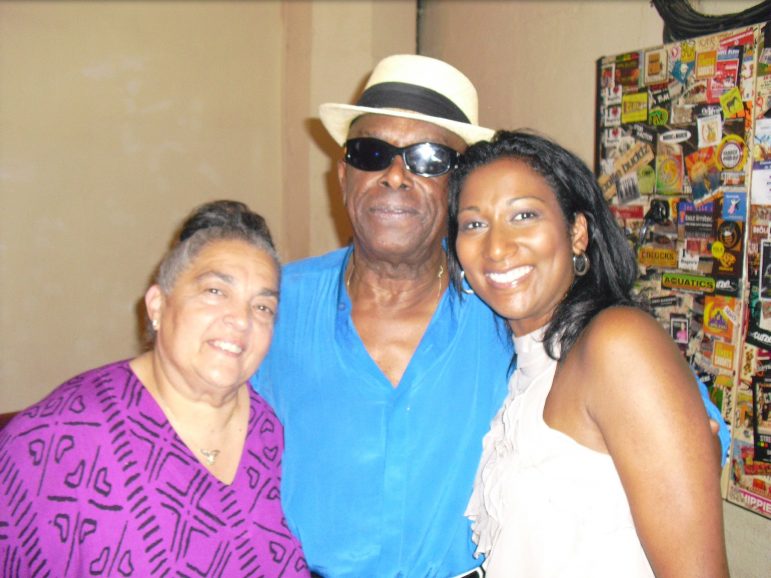 Leon and I spoke many times about the love between Carol and himself – and what a love story that was. What they had is what everyone aspires to. They were so in love, even after 30 plus yrs of marriage. The tenderness they displayed for each other was heart stopping and as I mentioned before they were more than happy to welcome everyone into their lives. Our conversations were never just business and we kept in touch in between tours as we were friends. They always took the time out to ask about the family, especially my children, they looked forward to updates on their latest escapades, almost like surrogate grandparents. On visits to the UK always had gifts for them.

Leon had just had his 77th birthday and of course I sent him a message, on Thursday he ran through my mind and I realised I hadn’t heard back from him yet only to wake up on Friday to the sad news.

Leon Ware was a giant and my heart was gladdened when I saw all the tributes flooding in, including tributes from Billboard and Rolling Stone….. finally some recognition as to who he was musically. But to me he was simply love with a good dash of sensuality!

He told me once to make sure I cherish everything, and I will, and one of my most cherished things will be my memories which along with his music made him immortal……or should I say eternal.